Bordeaux Wine Tasting: the ones that got away

Saturday evening (after I got back from Seattle: the Microsoft MVP Summit ) there was a major Bordeaux wine tasting event planned. My ex-neighbour Joe had initiated this, explaining that he had this bottle of Haut Brion that needed drinking.

But just as I arrived back on Saturday afternoon, somewhat jet-lagged (8 hours time difference), we heard that Joe had had to go into hospital, (he is out now) so the main event has had to be postponed to next year.

The ones that got away

Joe of course was being a bit economical with the truth: actually he had a whole case of Haut Brion and a bottle of Pichon-Longueville 1995. 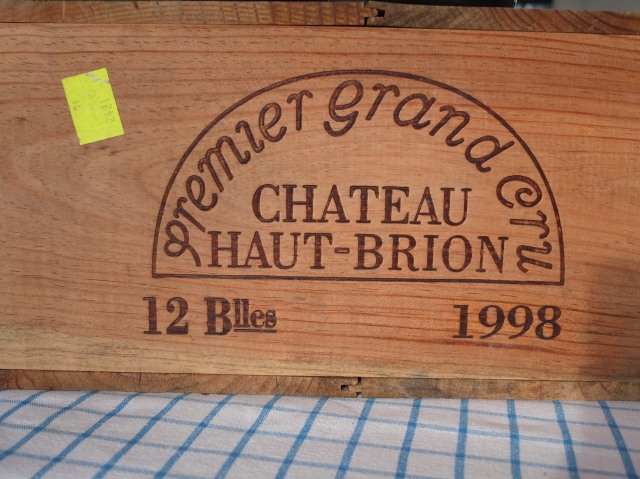 My contribution was a bottle of Palmer 1996 and a bottle of Phelan Segur 1996.
This would give us a Graves, Pauillac, Margaux and St Estephe to compare!

So we left those bottles for another day and went with a somewhat lesser selection:

The wines we actually tasted

We were down to the four of us, me and Jane plus our son Ben and his wife Jo.
Ben and Jo got married in 1996 so their contribution was a bottle of 1996 Champagne:

So we started the evening with that, accompanied by some smoked salmon. The champagne was a strong golden colour with a delicious rich taste.

Then we tasted the 1996 Phelan Segur against a 2002 Segla (the second wine of Chateau Rausan-Segla) and a 2002 Art Series Leeuwin Estate cabernet sauvignon.

The Phelan Segur was disappointing: tasting notes say things like – dry, thin, lacking fruit, although the colour and clarity were good. We had decanted it 2 hours before, which I think was a mistake: we will try opening and immediately tasting the next bottle. It scored 13 out of 20.

The Segal was nice but not exceptional: tasting notes say things like – pleasant nose, nice fruit, a little thin. It scored 14 out of 20.

Everyone really liked the Leeuwin Estate. (well of course its actually a bit of a cheat since its from Margaret River in Western Australia rather than Bordeaux). Tasting notes say things like – subtle, nice finish, red currants. It scored 16 out of 20.
Unfortunately that was my last bottle!

So it was a great evening (I crashed at 10.30 pm) but we are really looking forward to the rematch next year!

This entry was posted in Wine. Bookmark the permalink.

1 Response to Bordeaux Wine Tasting: the ones that got away